Farrell is always evaluated alongside Lopez (rule 2). This question adds Inman to the group, for a total of three candidates.

And Ullman can’t evaluate three additional candidates. Then Ullman would have four candidates, and there wouldn’t be enough candidates left for Rao, Smith and Tipton. You need at least four candidates for those officers, since Smith always evaluates at least two.

So only Smith and Rao can handle FL and Inman. I drew a separate scenario for each possibility. If you practice making local scenarios, you should be able to do this in 15-20 seconds and then quickly solve the question.

First let’s place FLI with Rao. Kent has to go with Tipton, because Kent has to be alone: 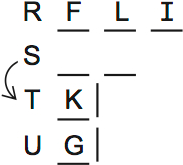 Only Hong and Madsen are left to place. They must be evaluated by Smith, since Smith must evaluate more candidates than Tipton does: 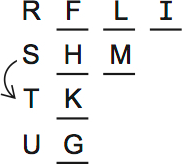 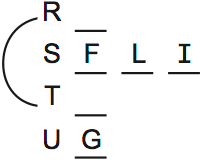 Rao and Tipton are the open groups, and they are interchangeable. Kent fills one of the groups. Now only Hong and Madsen are left to place. One of H/M goes with Rao or Tipton. The other H/M is flexible: they can go in the same group, or with Ullman:

The line between Rao and Tipton is a reminder than H/M and Kent are interchangeable in this scenario.

In both diagrams it is impossible for Lopez to be evaluated by Ullman. C is CORRECT.

We have done more work than we had to. But if you practice, it shouldn’t take you too long to make these scenarios, so the wasted effort doesn’t matter. The scenarios will also help you prove definitively that the other answers could be true.