This is an explanation of the second logic game from Section III of LSAT Preptest 35, the October 2001 LSAT.

There are six new cars in a showroom: T, V, W, X, Y, and Z. Each car has at least one of these features: power windows, leather interior, and sunroof (P, L, S). You need to match features to cars based on the rules.

This is a grouping game. We have to match features to cars: the cars either have a feature or they don’t. We can make many deductions by combining rules.

The first question is whether to set this up vertically or horizontally. I find a vertical diagram best, but you can draw it differently if you prefer.

If you read through the rules, you’ll see that the cars are the base units, and you have to decide which features they have. Each car has at least one option.

Here’s how I drew it. Each car has three possibilities: P, L or S, so I drew three spaces by each car. 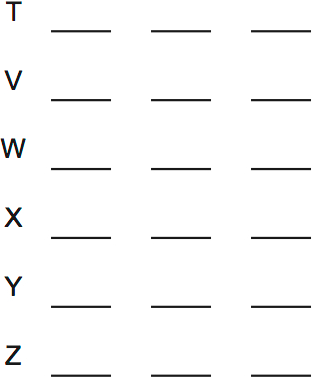 The first two rules are simple. They just tell us which options V and W have. 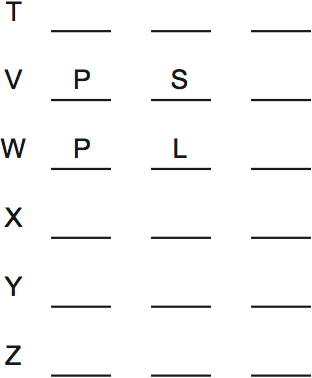 At this point, we’re not told those are the only options V and W have. As far as we know, those cars could have a third feature.

The next rule is more restrictive. Y doesn’t have any option that W has. Since W already has two options, that means Y must have the third: S. 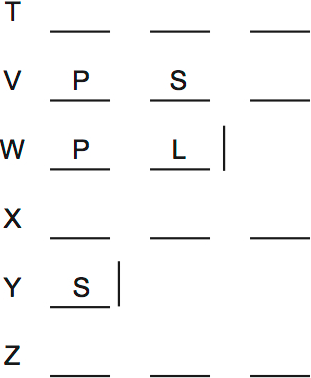 Further, now W can’t have S. If W did have S then it would have an option in common with Y. So Y can only have one option, and W can only have two. I’ve drawn a vertical line to indicate that they can’t have any more.

V’s lack of vertical line means it can have 2 or 3 options.

The next rule is also quite informative. X has a larger number of options than W. Since W has 2, X must therefore have all 3 options. 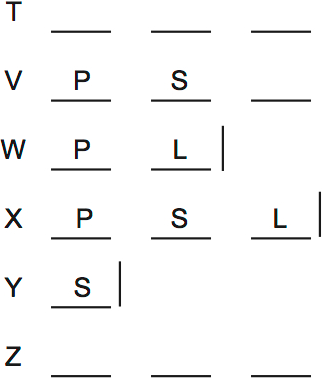 The next rules says that V and Z have exactly one option in common. Z can’t have three options, otherwise it would share two with V. 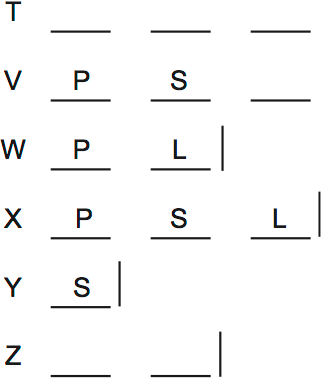 The last rule almost completely locks down the game. Z has more options than T. That means Z must have two options, since T has to have at least one.

That means Z has L, and one of P/S. We also know V can’t have L, because Z and V only share one option.

We don’t know which option T has, but it can only have one, since Z has more options. 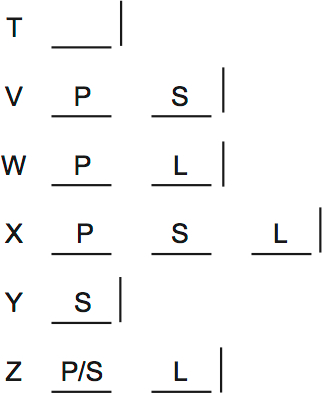 Wow. There isn’t much to decide here, is there? The only options are whether Z has P or S, and which option T has.