I actually got this question wrong when I took the test under timed conditions. (Yes, I make mistakes)

I chose A, because I forgot that the romance film can’t go in group 2.

But I’m getting ahead of myself, I’ll show you the diagram we can draw based on the new rule this question gives us.

This question says that W and S are in the same group. That means they’re in group 1 or 2, because only those groups have two spaces.

We can also figure out the order of W and S. The western has to go before the horror film, so the western can’t go in group 3. Therefore the western goes at 7, and the sci-fi goes at 9.

So we get these two diagrams: 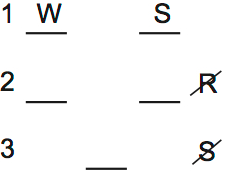 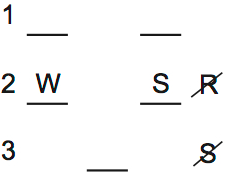 But actually, the first diagram won’t work. The romance film can’t go in group two, so it would have to fill group three.

That would leave the mystery and horror films to go in group 2. And that violates rule 4.

So we’re working from the second diagram. One of M/H goes in group 3, because they can’t go together: 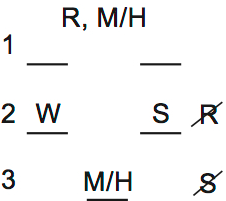 The romance film and the other one of M/H fill group 1. Just remember that the horror film can’t go at 7 o’clock, because it comes after the western.

This is a could be true question.

A can’t be true. The second screen is filled by the western and the sci-fi film.

B is CORRECT. This diagram shows that it works: 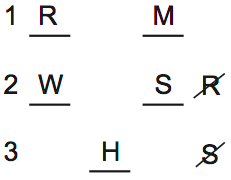 C doesn’t work. If the romance film is on screen three, then the mystery film and the horror film would have to go together, which violates rule 4.

D can’t be true. If the sci-fi film starts at 7, then the western would start at 9, since they’re in the same group. But the western can’t start at 9 – it has to go before the horror film (rule 1).

E doesn’t work. This question says that the western is on the same screen as the sci-fi film. Only screens 1 and 2 have two spaces, and neither of them have a show starting at 8 o’clock.