This question places the romance before the western. We also know that the western is before the horror film. So we get this order:

That means the romance is at 7 o’clock, the western is at 8 o’clock, and the horror film is at 9 o’clock.

The romance film can’t go in group 2, so it must be in group 1. The western is in group 3, as that’s the only screen with an 8 o’clock showing: 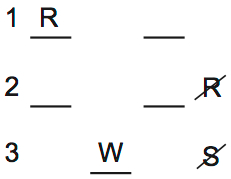 Next, the mystery and horror films must be in different groups (rule 4). That means one of them is in group 1, and the other in group 2: 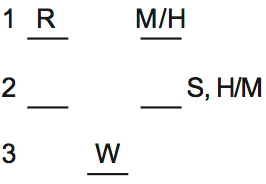 The sci-fi film also has to go in group 2, as it’s the only group left open. E is CORRECT.

In case you were wondering, I drew S and M/H to the right of group two, with a comma, to indicate that they both go in that group, in either order.