There’s no way around it. This is a very hard game. I’m not even sure what type to call it.

The best way I know of to solve it is to make a rough structure, and then flesh it out on individual questions. I’m not sure quite how to put it, but the diagram should clarify what I am referring to. It would be a mistake on this game to try to map out all possibilities in advance: there are too many.

I made one mistake on this, by the way. I should have made zero, but I had less time than I wanted because I went very slowly on game 2. (I got interrupted in the middle of game 2, so I’m not sure whether that game was really hard, or whether it was the interrupt which caused the problem.) With 30-40 more seconds I think I would have gotten all the questions on game 4. I do often spend 12 min or so on one hard game, if I’ve gotten through the others quickly enough.

Enough preamble. Here’s what I drew for this one:

Next, I drew these two diagrams for rules 4 and 5: 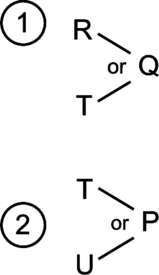 These show that one of the preceding computers transferred the virus. (Only one computer can transfer). So, either R or T transferred to Q, but not both.

A note on how to use these: on some questions, you’ll end up with a scenario where, for example, T transfers to R, only. What does that let us prove? Well, T was also an option for Q and P. But, since T doesn’t transfer to them, that means you can also say that “R transfers to Q” and “U transfers to P”, because those were the only options that weren’t T on the two diagrams above.

So, the main method I used on this game was to quickly glance between the three diagrams, and figure out if a change on one necessitated a change on the other two. I don’t know of a better method. If I think of one after repeating this game a few times, I’ll update this explanation. But, there may be none – this is a hard game. But knowing that there are really only three main rules to look at simplifies things.

Note: you must also remember one rule. No computer transfers more than twice. You should also remember that there are only six computers. So, the first diagram is actually more complete than it seems. It pictures four computers. Two of them are blank, but this at least gives us a skeleton structure for the order.

Only T and U can go first

This wasn’t a deduction I added to the diagram, but I think it’s important to know. The computer that goes first can’t be on the right hand side of a transfer. And, if you look at the setup, you’ll see that:

I didn’t actually draw this, because I found there were too many branching diagrams. But, it’s still helpful to know that only T or U can go first.

How the virus transfers

Apart from the rules, you need a high level model of what’s happening in the game. This isn’t super complicated, but if you start without one, it’s disastrous.

Again, none of these are complicated, but this is the sort of thing you must sort out when you see a new game type. It’s worth spending more time upfront to be clear on what’s happening.