This is an explanation of the third logic game from Section III of LSAT 70, the October 2013 LSAT.

A repertory theatre is showing fives movies on three screens. There will be a horror film, a mystery, a romance, a sci-fi film, and a western (H, M, R, S, W). The films can be shown at 7 o’clock, 8 o’clock or 9 o’clock. You must decide which films go on which screen at what time.

This game is a mixture of linear and grouping. I don’t classify games beyond that. Few people who score well on logic games really care about games classifications. That’s just something prep companies invent to sell books and courses, and also because they enjoy classifying things.

It’s more important to repeat games and develop an intuitive sense of how to draw the rules.

Ok, let’s look at the setup of this game. First, you need to think about how to draw this game. There are three groups, and three time slots. The first question is a good guide to how to represent this. They’ve arranged the groups vertically, and the times left to right. I’ve added a slight modification to make clear that 8 o’clock is after 7 o’clock. I’m just going to draw the diagram like this once, so that it’s perfectly clear to you where 123 and 789 are. But for future diagrams, I’m going to leave off the 789, like this: The 789 diagram is very cluttered. If you put too much stuff on your diagrams, your brain won’t be able to make sense of them.

And actually, my own diagrams are even more minimal. My main diagram has the 123, but my diagrams for individual questions generally don’t have numbers. Here’s a scenario from question 17, drawn the same way I’d draw it on my page: 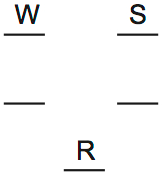 It’s lightning fast to draw a diagram like that, and by glancing at the main diagram I can orient myself easily. My main diagram is on the second page, beside the questions.

Even looking at this, without checking my main diagram, I find it obvious to see which groups are 123 and 789.

However, I’ll be including the 123 for the rest of the explanations, for clarity. However, I encourage you to experiment with the most minimal diagrams that make sense to you.

I’ve just given you a little peek behind the curtain. The explanations in all of my books are very similar to what I would draw on test day, but they’re not identical.

This is true of every set of logic games diagrams you might find online. LSAT instructors need to add some complexity in order to make diagrams clear for explanatory purposes. But you should leave off any details you don’t find essential. Your diagrams only have to make sense to you.

You could also add this rule to the diagram as “not” rules, where you draw “not H” under slot 7, and “not W” under slot 9. I’m avoiding this, because that’s a tactic for beginning students. Advanced students can tell just by looking at W – H that H can’t go at 7 o’clock and W can’t go at 9 o’clock.

Rule 4 says that H and M don’t go in the same group:

You may recognize this as a diagram that’s also used in linear games. I’ve never run into a problem using it for both linear and grouping games.

If this were a linear rule, it would mean that HM can’t go beside each other, in either order. As a grouping rule, it means that H and M can’t be in the same group.